One of the most common and costly: worrying about dying too soon 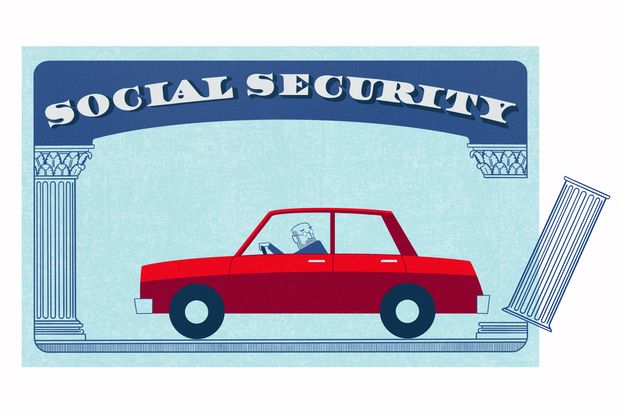 There are six main ways to do damage to your Social Security plan, according to academics, financial advisers and a CPA that weighed in on the issue.

And it can cost them dearly.

For the typical American household age 55 to 64, the present value of this government pension represents 60% of their retirement assets, dwarfing the values of their homes and savings, according to Boston College’s Center for Retirement Research. Even for affluent families, Social Security income remains crucial.

“If you have a high-earner couple who earned the max and don’t claim until 70, you’re talking about [getting] the better part of $100,000 a year,” says Alicia Munnell, the center’s director. “You have to be very wealthy before you don’t consider that important.”

We’ve talked to academics, financial advisers and a certified public accountant to identify the biggest Social Security mistakes people make. They say too many people claim it early, putting themselves at risk of outliving their assets. Many of those who claim early also choose to stop working to ensure they don’t exceed the Social Security earnings limit and trigger a temporary reduction in benefits—even though continuing to work would usually boost the benefit they get when they reach full retirement age.

Meanwhile, many widows and widowers aren’t using a permitted tactic that allows them to file for a monthly check early in retirement and claim a bigger check later.

Before getting into the specifics, it’s important to look at what makes Social Security so valuable.

The basic formula for determining benefits last changed in 1983, when interest rates were higher and people didn’t live as long. As a result, Social Security is more generous in how it calculates your benefits than the annuities offered by insurers. If you claim Social Security at age 70 instead of 62, your monthly benefit will rise at least 76%.

What’s more, Social Security is adjusted each year for inflation, meaning that it never loses value. And there are spousal benefits, divorce benefits, disabled children benefits and survivor benefits. When you die, your spouse can continue to collect your benefits for the rest of his or her life.

With all that in mind, here are six big mistakes Americans make when it comes to getting the most from Social Security:

1. Worrying about dying too young

Many clients file for Social Security benefits earlier than necessary because they fret about not living long enough to get all their money back from the government program.

They have it all backward, according to Boston University economist Laurence Kotlikoff, who heads a firm that sells Maximize My Social Security software, which helps people determine when to start collecting their benefit.

Social Security is longevity insurance, he says. That is, it offers protection against running out of money as we age. People don’t do break-even calculations when they buy home insurance, because they are protecting themselves against a catastrophic event like a fire. They shouldn’t do them with Social Security either, he says.

“We can’t determine when we’re going to die,” he says, “We have to focus first and foremost on the worst case, as if we’re going to live forever. Living a long time is a financial disaster. It may be good personally.”

That message is getting through to more Americans. The percentage taking Social Security as soon as they are eligible—at age 62—has roughly halved in the past 15 years, to about 25% in 2019. Even so, only about 6% of Americans claiming Social Security in 2017 were age 70, according to the Center for Retirement Research.

2. Waiting too long to claim

While most people should wait longer to claim their benefit, a significant minority of Americans should claim early. If you have disabled child who is entitled to Social Security benefits through you, for example, he or she can’t receive them until you claim benefits yourself.

“At that point, you probably want to draw early,” says Bill Reichenstein, a retired Baylor University professor who is the head of research for Social Security Solutions, which provides education and tools to help people determine the best time to start collecting Social Security.

If you are single, in poor health and don’t think you’ll make it to age 77, it also makes sense to claim as early as 62, according to an analysis from Dr. Reichenstein.

The calculation changes for married couples. If you are the primary earner in the family, you generally should claim benefits early only if both you and your spouse are in very bad health. If you die early but your spouse is healthy, he or she likely will be living off your Social Security check, so you want it to be as big as possible.

3. Not working because of the earnings limit

If you claim Social Security before Jan. 1 of the year you reach full retirement age, and earn more than $18,960, the government will reduce your benefit by $1 for every $2 of earnings in excess of that amount. People turn down work because of that rule.

They shouldn’t. In most cases, they will get back the money they lost because the government will adjust their benefit upward once they reach full retirement age, as if they had waited to start collecting it. It is the equivalent of a do-over for those who started Social Security too early.

“It does precisely what you want, which is to take money that you don’t need now, and give it to you later when you do need it,” says Dr. Munnell of the Center for Retirement Research.

So if you lost your job because of the pandemic-related lockdowns and had to start drawing Social Security to stay afloat, fret not. You can go back to work and exceed the earnings cap, even as you continue to bulk up your Social Security benefits down the road.

4. Not filing for widow’s or widower’s benefits

Suppose you and your spouse both work, and you are widowed young. You can file for survivor benefits at age 60—two years earlier than the minimum eligibility age for standard Social Security—and allow your own benefits to grow until you reach age 70. At that point, you would switch from the survivor’s benefit to your benefits, assuming your benefits are larger.

If they are smaller, you can do the reverse. You file for your own benefits at the minimum age of 62, and let the survivor’s benefit grow until it peaks. At that point, you can switch to the bigger benefit in most cases.

Many widows or widowers fail to use this strategy, says St. Louis certified public accountant Mike Piper, who operates the opensocialsecurity.com benefits calculator. “You can miss up to 10 years of benefits if you don’t know about it,” he says.

It is the same “restricted application” strategy that married couples widely used until Congress cracked down a few years ago. That strategy is now limited to spouses who were born before Jan. 2, 1954, but there is no such limit when it comes to widows and widowers.

Breaking up may be the right thing to do, but it can wreak havoc on your Social Security benefits.

If you’re married for less than 10 years, you usually aren’t entitled to a spousal benefit if you divorce. That can be a lot of money. Even if you never worked, you’re entitled to 50% of your spouse’s benefit at full retirement age and the survivor benefit, which is 100%, if you outlive him or her.

“You should be aware that it could be smaller if your new spouse’s earning record is lower,” says Mr. Piper.

If your ex-spouse is deceased and you were married at least 10 years, you may still be eligible for survivor benefits even after you remarry if you are at least 60 years old when remarrying.

Social Security benefits may be subject to federal income tax, depending on a person’s total income. For some middle-income retirees, this can lead to surprisingly high marginal tax rates as each additional dollar of income causes more Social Security income to be taxed.

Take the case of a single retiree with $32,400 of Social Security income and a $1,149,594 tax-deferred account. At age 72, she must take a required minimum distribution, or RMD—the annual payout that savers must take from their retirement accounts at a certain point, as required by law—of $44,906 under the current Internal Revenue Service table, calculates Mr. Reichenstein. She is in the 22% tax bracket. But the last $9,552 is taxed at a 40.7% rate because each dollar caused an extra 85 cents of Social Security income to be taxed, he says.

The conventional wisdom is that Americans should hold off tapping 401(k) accounts and individual retirement accounts as long as possible to get the maximum tax-deferred growth. Many retirees opt to collect Social Security to avoid drawing down their tax-deferred account, says Dr. Kotlikoff.

“If you’re in a low tax bracket, it’s exactly when you want to take the money out,” he says.